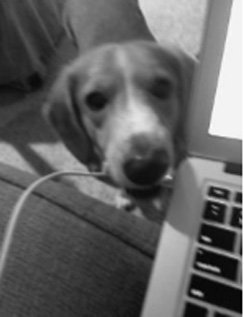 Louie is a huge fan of my son-in-law, Matt. He thinks they are best buds. I’m not sure how this little love fest began, but perhaps it has something to do with Louie feeling like he and Matt are guys’ guys! Or that Matt usually has one of Lou’s alpha pups with him. But every time a truck roars down the street, Louie does back flips hoping it’s his buddy, Matt, and then he whines when it’s not.

I agree with Louie; Matt is indeed pretty special. We were having a conversation the other evening about the difference between the phrases “let it go” and “leave it.” While my granddaughters broke out in song, Matt wisely and simply explained that “let it go” means you actually have something to release, while “leave it,” means you haven’t taken possession yet.

“Leave it” is a command I often use with Louie. When we’re passing a dog he doesn’t like, or when he thinks he needs to run from a cat, or he wants to rummage through a neighbor’s garbage bag, “leave it” is a common command for dogs and seems to work pretty well. He immediately points his nose forward, continues prancing down the street and leaves the matter behind.

There are other times when “leave it” just doesn’t work. He can’t leave the feelings of fear or frenzy behind. He huffs and puffs and focuses on whatever is disturbing him. I recognize that those times will take a little more direction on my part. I stand between him and the object, and make him sit and look at me, which is a command he immediately obeys. Sometimes, though, his eyebrows go up and his ears go back, indicating he’s less focused on me and more on the source of his obsession. Occasionally, I will offer a treat to get him to focus on me. The goal is teaching him that whatever has caused him unpleasant feelings in the past can no longer have control over him. Like humans, Louie has a tough time learning that lesson.

Sometime ago, after one “leave it” incident, I reflected on Matt’s wise words. I remember listening to my granddaughters sing the song, “Let It Go” repeatedly and thought about the hidden gems in the movie Frozen (It was a very long walk). In the movie, Anna, the youngest daughter of the Queen and King and little sister of Elsa, was accidentally struck by Elsa’s ice powers. The family immediately took her to Pabbie, the leader of the trolls, who healed her and wisely explained that fear will always be Elsa’s enemy. The family then went home and closed off all the windows and doors because they thought Pabbie meant others would fear Elsa’s powers. But in reality, Pabbie meant it was Elsa’s and her parents’ own fears that would be the enemy. Elsa’s fearful emotions controlled her and caused confusion and disorder. Sadly, she distanced herself from everyone around her, even those she loved. This is true for many of us, as well.

What was the remedy? An act of true love. Not the romantic, superficial type, but honest, genuine, selfless love. And the affable, lovable snowman, Olaf, displayed that love when he was willing to melt into a puddle because he put Anna’s needs before his own. Fortunately, Elsa’s icy heart melted because of her love for her sister, and it all ends well.

Good leaders notice when others may be steeped in fear or wallowing in angst over a situation. While a simple reminder to “leave it” or “let it go” may work temporarily, helping them focus on their strengths, on the positive parts of the project and offering guidance and wisdom to persevere is more effective.

Louie has learned that the command “leave it” means I love him, he can trust me, and whatever is causing him angst is not worth it. He has learned to focus on my gentle leading and when he does that, the irritation passes. But it requires more than words and simple remedies— it takes time, patience, love and hopefulness.