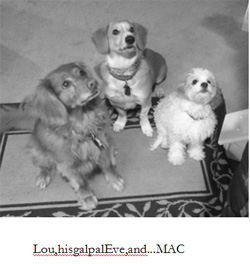 There’s a new boy in the neighborhood, and Louie is not happy. Although Lou loves when a new gal pal moves in, he is not very fond of this little pup, Big Mac.

Life was going along just fine for Louie. Everybody loves on him when they see him, and they pay attention when they hear him whine for their attention as we walk. He gladly accepts invitations into other people’s homes, and thoroughly enjoys running around the yard with his buddy, Mick. And then came Mac. Mac is seven pounds of fluffy white and brown hair and super power energy. And everyone thinks he’s adorable…except Lou.

At first, Louie was okay with the idea of a new dog in town. He checked out Mac via the smells he left in his owner’s front yard, and Louie was intrigued. Then Lou saw him from a distance and things seemed fine. But when they met face to face, Lou immediately ran the other way. Mac had too much energy and in your face action. Mac’s mom and I gave them time to warm up to each other but one afternoon I noticed something. Louie was particularly clingy to Mac’s mom, as though he needed reassurance that she still loved him. Then Lou gave Mac a quick snarl as a warning and went off to play with another dog he has known for some time.

Oh the dreadful feeling of envy that slithers almost unnoticeably into our hearts. We’ve all experienced it. It usually creeps in with its pal, comparison, and causes resentment of what we perceive as someone else’s advantage—in Louie’s case it was the serious cuteness of another pup, resulting in lots of attention from everyone.

I thought about this in regards to the common leadership adage of surround yourself with those who are smarter than you. What is not part of that quote is to be sure and check your level of confidence. Many leaders say they are looking for others who can be a great addition to their teams but then squelch any opportunity for the new person to actually use their skills for fear it may outshine them. Those leaders will find acceptable ways of expressing their resentment by using the big “but” approach—“He may be a good sales person BUT he doesn’t have a clue how to write a decent proposal.” Or sometimes we question someone’s motive because we are actually envious toward him or her.

I once read a story* of two men, both of whom were seriously ill and occupied the same small hospital room. One man was allowed to sit up in his bed for an hour each afternoon to help drain the fluid from his lungs. His bed was next to the room’s only window. The other man had to spend all his time flat on his back.

The men talked for hours about everything. Each afternoon when the man in the bed by the window could sit up, he would pass the time by describing to his roommate all the things he could see outside the window. The man in the other bed would live for those one-hour periods when his world came alive because his roommate described a park with a lake, on which birds swam and by which children played. Although the other man could not hear any of the sounds, he could see them in his mind’s eye as the gentleman by the window beautifully described all the activity.

That is until envy slithered in: “Why should he have all the pleasure of seeing everything while I never get to see anything?” It wasn’t fair. At first, the man felt ashamed because he enjoyed the man’s friendship and thoughtful descriptions of what was going on outside the window. But as the days passed, his envy eroded into resentment. He began to brood, and he found himself unable to sleep. He should be the one by that window— and that thought controlled his life.

Late one night as he lay staring at the ceiling, the man by the window began to cough. He was choking on the fluid in his lungs. The other man watched in the dimly lit room as the struggling man by the window groped for the button to call for help. Listening from across the room, he never moved, never pushed his own button, which would have brought the nurse running. In less than five minutes the coughing and choking stopped, along with the sound of breathing.

Now there was only silence—deadly silence. The following morning the day nurse arrived to bring water for their baths. When she found the lifeless body of the man by the window, she was saddened and called the hospital attendants to take it away–no words, no fuss. As soon as it seemed appropriate, the other man asked if he could be moved next to the window. The nurse was happy to make the switch, and after she was sure he was comfortable, she left him alone. Slowly, painfully, he propped himself up on one elbow to take his first look. Finally, he would have the joy of seeing it all himself. He strained to look out the window beside the bed and found it faced a blank wall.

Envy is indeed a deadly sin and more pervasive in leadership than we think. If we as leaders are not careful, we can allow envy to kill spirits and damage our team’s morale.
As for Louie and Big Mac, I am sure Louie will learn to love Mac—all in due time!